A Dominican and a Carmelite walk into a bar…

A sermon preached at Vespers for the Opening of the Academic Year at Fisher House, the Roman Catholic Chaplaincy to the University of Cambridge by Sr Ann Catherine Swailes o.p. 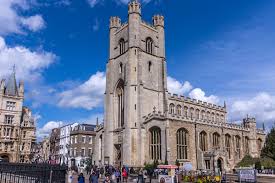 A Dominican and a Carmelite walk into a bar…

This isn’t the opening line of a terrible joke, but an invitation to a  kind of thought experiment for the opening of the academic year. Those of you who are new to Cambridge will doubtless have been bombarded already with well-meaning, and more or less helpful, advice about what to expect from your time here and how to make the most of it. Some of this will have been in official induction sessions in college or faculty, but more useful information is often communicated in more informal settings.

So, I was wondering: if some of our brothers and sisters the saints were to wander into the Black Swan Bar of a Friday evening, what words of wisdom might they have to share with us as Michaelmas Term gets under way in earnest?  I’d like to offer a couple of suggestions for voices with something to say to us here.

So, first, the Dominican, St Thomas Aquinas.  In the course of a dizzyingly busy and productive scholarly life, Thomas found time to write a lengthy response to a young brother in his community who plucked up the courage to ask for tips on how best to study. Thomas’s letter is full of robust common sense, perhaps more so, indeed, than many of his commentators have dared to admit. A pun, for instance, in which he encourages young Brother John to spend time in his cell if he wants to be allowed into the wine cellar frequently becomes a reference to an entirely allegorical wine cellar, seen as an image of celestial bliss, thus putting a slightly uncharacteristically moralistic message on Thomas’s lips: study hard and you will get to heaven. Now, it’s perfectly true that Medieval writers, Dominicans especially, as it happens (make of that what you will!) did often use images of drinking and getting drunk to symbolise the joy to be found in surrendering to God’s love in prayer. But I suspect they only thought of symbolic wine cellars like this because of their experience of literal wine-cellars. Thomas may, then, here be talking about that moment when study impels us to our knees, when, in the beauty of God’s  creation discerned through the natural sciences, or the dignity of humanity made in his image revealed in the arts, we catch a glimpse of the divine beauty and dignity. He may well be thinking of that moment when, in, as the poet Louis McNeice puts it, “the drunkenness of things being various”, we are inebriated with sheer joy and wonder, and study becomes prayer. Indeed I’m sure he is. But I think he is also saying quite simply: aim for balance, balance between the hard graft of study and the relaxation that empowers it and is a good gift of God in itself – and give thanks for both. A message, dare I suggest, which is just as practically useful in 21st century Cambridge as in 13th century Paris.

But perhaps more intriguing yet is Thomas’s comment, more or less in passing, that, in the intellectual life, one should seek to know not by whom something is said, but, rather “what is said, that you should commit to memory”.  One should pay heed, in other words, to the intrinsic authority of a text, not to its authorship. Thomas certainly took his own advice, regularly citing pagan, Jewish and Islamic sources alongside the Fathers of the Church, not out of a naïve credulity or relativism, but in the conviction that whatever is true has its ultimate origin in the one good God who is himself the truth. Such generous hospitality to the truth wherever it is found is still a worthwhile aspiration for all of us who study, and a challenge, too,  especially perhaps today, where it is all too easily confounded with relativism, and applauded or deplored accordingly.

But maybe Thomas’s words can also be read as posing a still deeper question, addressed to that profound tendency in all of us to take refuge from the lack of confidence we all feel in our own opinions, in the seductive call of a ready-made identity, our identifying ourselves with a party line, and in-group, the big characters. But – do not heed by whom a thing is said; what is said, rather, that you should commit to memory. It can be hard, chillingly hard, to be true to oneself, especially when, as is the case for all of us at least some of the time, we are not completely sure we know who we are. And we certainly shouldn’t beat ourselves up if we find ourselves borrowing outlooks, trying them on for size till we find the one we can wear with true integrity. But we should beware of assuming that simply because a voice hawking its wares in the market place of ideas is loud and dominant it is the voice of the truth. Do not heed by whom a thing is said…

The second voice I’d like to suggest as worth listening to is perhaps a little more surprising. Aquinas, after all, is the patron of scholars and students, and it is obvious why, whereas St Therese of Lisieux, whose feast day we celebrated on Monday, left school in her early teens, was in an enclosed monastery by the time she was fifteen, and her death, when she was not much older than most people are when they graduate from Cambridge, left her Superior scratching her head about what to put in her obituary. A sweet enough little thing, the Prioress conceded, but what did she ever do? And what, we might be tempted to think, could she possibly have to teach us?  But the Church’s judgement has evidently been different: canonised a quarter century or so after her death, she was declared a doctor of the Church by St John Paul II, so, outstanding not only for her example of holy living, but, precisely, for her teaching. She clearly does have something to teach us, then, but I suspect it is all too easy to misunderstand what that is. Many will tell you, for instance, that Therese urged that doing little things perfectly was the way to holiness. She did not, so far as I know, and it is a dangerous travesty of her teaching to insist that she did. Anyone who has lived in a religious community for any length of time will realise that it is possible to become as proud of one’s achievement in preparing supper for the sisters as of writing a theological tome to rival the Summa Theologiae. And, at least as much to the point, as possible to fall into despair over one’s inability to keep one’s habit as neat and tidy as Sr X’s.  Perhaps even more so: it’s such a little thing, we tell ourselves, and we can’t even get that right. And analogous things are not, I suspect, exclusive to religious, especially at the openings of new chapters in our lives.  But, consolingly, Therese is less interested in doing little things perfectly than in doing things, great and small, with love.  And love, for Therese is not something we autonomously generate, whether by working up fervent emotions or by grimly pulling ourselves up by our boot-straps. Love, for Therese, is always and only a gift of God; our part is to be open to that gift, and open-handed enough not to grasp it for ourselves, but to hand it on to others; yes, in prayer for them, but also in the little acts of kindness and the great acts of sacrifice that make up all human lives, ours included.

What then, would she say to us as we begin another year in Cambridge?  Maybe, what she wrote near the end of her life: “in the evening of my life, I will appear before God with empty hands”. This sounds negative and not a little depressing, but that, I think, is to misunderstand it. This isn’t faux humility; Therese claiming passive-aggressively to be a poor little thing. Therese was well aware of her own worth. In her early days in the monastery she was rebuked – by a remarkably stupid confessor, I think it should be said – for her pride in wanting to be a great saint. And, fascinatingly, when she was complimented by a sister in her own community for her humility, Therese didn’t pretend to deny it: yes, she said, I think I am humble. Therese knew her own worth, and she knew it to be infinite, as infinite as the love of God poured out upon her. She aspired to appear before God with empty hands not because God had given her no gifts, but because they had passed through those hands, in love and joyful service to the world.

Those, whoever we are, and wherever we find ourselves in our journey with the Lord tonight, are the words of a voice worth listening to.