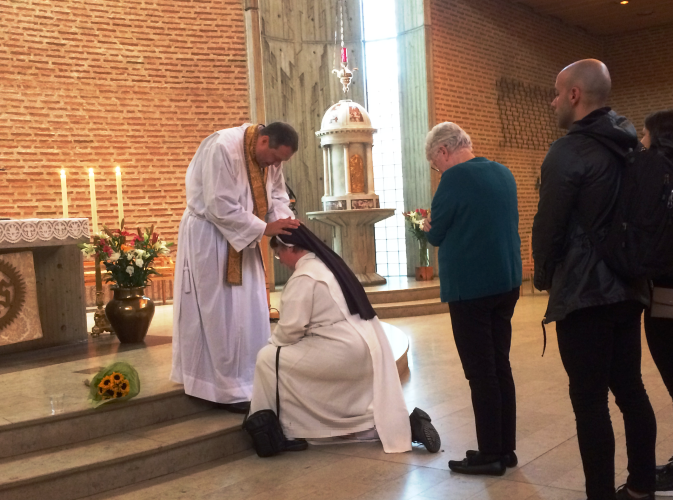 Sometimes in the humdrum of our lives we wish we had the gifts of some other person, and this wish is not always ignoble – or if it is it very skilfully disguises itself – ‘If only I could be the great saint who converts my country, or who sacrifices all and puts an end to abortion, or who preaches so magnificently that  my religious  Congregation is restored to its former vitality’ or whatever floats your boat.  There may well be some genuine sorrow there for the ‘might-have –been’  that we have conclusively ruled out because of our sins.  I wish I had been more generous earlier and become a sister in my twenties, for example.

Mother Theresa is quoted as saying that where you are is where God has called you to be.  Now evidently this admits of exceptions, especially in the young and in those on the brink of retirement, and those who are deeply involved in sin by remaining where they are, but it does  nonetheless point to a fundamental truth about our lives.  God knows and loves us far more than we know or love ourselves, and He knows our weaknesses and our strengths.  So He calls us to serve in particular ways, which for most of us most of the time implies being satisfied with where we are as a field of action.  Some poor farmer on a mountain at the other end of the world may seem a more worthy recipient of our missionary zeal, while meantime the milkman and our colleague at work is not someone whose soul we seek to save by introducing them to Christ.  But if you do not, who will?

I teach Latin and am prey to the temptation to feel this is very useless.  But maybe, somehow in trying to make that work be for God’s glory I can after all build up the Kingdom, even if I am only the smallest pebble in the whole of that great building that is the Church, and occasionally I get to feel that, when the seminarians I have taught are made priests and give me their blessing.