Hope, alignment, waiting for the Lord: The place of baptism 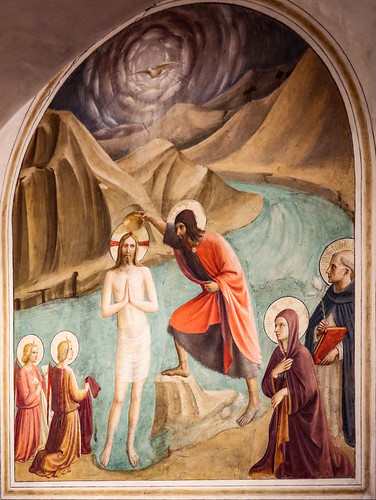 In the readings for Sunday we shall hear about the promised ‘Servant King’ Who is faithful and will bring true justice, Whom ‘The islands’ are waiting for (I suppose that must be us!), the ’covenant of the people and light of the nations,’ Who will ‘open the eyes of the blind, and free captives from prison’(Isa.42 vv1-7), Who will ‘Bless His people with peace.’  This God of ours, Who has been incarnated in the person of Jesus Christ, ‘has no favourites’ but ‘Is the Lord of all men’ Acts 10, 34 ff)

In the Gospel we see the first act of public witness of Our Lord’s adult life: ‘Jesus came from Galilee to the Jordan to be baptised by John.’  So what is this baptism, and what is its significance for us?

Baptism was and is part of Jewish practice: people went through ritual washing in a variety of settings: cisterns of standing water, pools refreshed by rainwater, the custom-built ‘mikveh’, fountains, and rivers or lakes.  ‘Living waters’ were considered the best option: the Jewish ‘Mishnah’ (the first major written collection of the Jewish oral traditions known as the "Oral Torah".) specifies a preference for a larger fresher body of water ‘For in it persons may immerse themselves and immerse others.’  At the time of Our Lord a Jewish sect called the Essenes were baptising people out in the Judean desert, and it seems likely John the Baptist had some contact with them.

From the Old Testament we hear that God commanded Moses to ‘make a laver of bronze, with its base also of bronze, for washing. You shall put it between the tabernacle of meeting and the altar. And you shall put water in it, for Aaron and his sons shall wash their hands and their feet in water from it. When they go into the tabernacle of meeting, or when they come near the altar to minister, to burn an offering made by fire to the LORD, they shall wash with water, lest they die. So they shall wash their hands and their feet, lest they die. And it shall be a statute forever to them– to him and his descendants throughout their generations.” Exod 30:17-21.  That is to say, priests had to be ritually clean in order to serve in the Tent of meeting, and later, in the Temple.  Other people who had in some way become ritually unclean and who wanted to take part in the Temple worship had also to go through a ritual washing.  Ritual uncleanness was associated with sexual intercourse, with women’s periods, with child-birth, and with touching a leper or a corpse.  (Cf Leviticus chs.12-15; 22; Numbers 19 ).  In addition, according to rabbinical teachings, Baptism, next to circumcision and sacrifice, was an absolutely necessary condition to be fulfilled by a proselyte to Judaism (cf http://www.jewishencyclopedia.com/articles/2456-baptism )

Immersion for ritual uncleanness was therefore quite common. The word for the place of baptism was ‘mikveh’ a word in Hebrew associated with the words for hope, alignment, binding together and waiting for God (cf. Strong’s Lexicon entry on Mikveh).  This association of ‘binding together’ is the same word as the Psalmist uses when he says things like ‘I waited for the Lord.’  The word is used in Jeremiah to refer to God Himself ‘Lord you are the ‘mikvah’ of Israel’  (Jer.17.5)This is normally translated as ‘hope’ but hhas the same root as the word for the place of baptism. ‘A “Mikveh” of living water represents the bounty and resources of the new life that we can enjoy in God.’

With reference to Ezek. xxxvi. 25, "Then will I sprinkle clean water upon you, and ye shall be clean,"   A Jewish Rabbi, R. Akiba, in the second century, said "Blessed art thou, O Israel! Before whom dost thou cleanse thyself? and who cleanses thee? Thy Father in heaven!" (Yoma viii. 9). (cf http://www.jewishencyclopedia.com/articles/2456-baptism )

So when Jesus comes to John, to the place of baptism, why was He baptised?  St Thomas Aquinas says (among other things) that it is ’so that by his touch Jesus might consecrate all the water’. https://aquinas.cc/la/en/~Matt.C3.L2.n290.2  The ritual baptisms of the Old Law only serve to cause a ritual cleansing of ritual impurity, and have no power to remit sin: but after the baptism by John, through the power of the Body of Christ, after the baptism by John, all water in every part of the world is enabled to wash away actual sin.   As it says in the Catechism of the Catholic Church, Sacraments are "powers that comes forth" from the Body of Christ,33 which is ever-living and life-giving (CCC 1116) Jesus is, as it were, our ‘Mikveh’.  He Who ‘willed in his compassion to wash away the sins of the world’ opens the way of hope, He aligns us with God, and He Himself is the ‘Water of Life’ which purifies us, restores our hope and gives us new life.  (cf Jn 7.37).