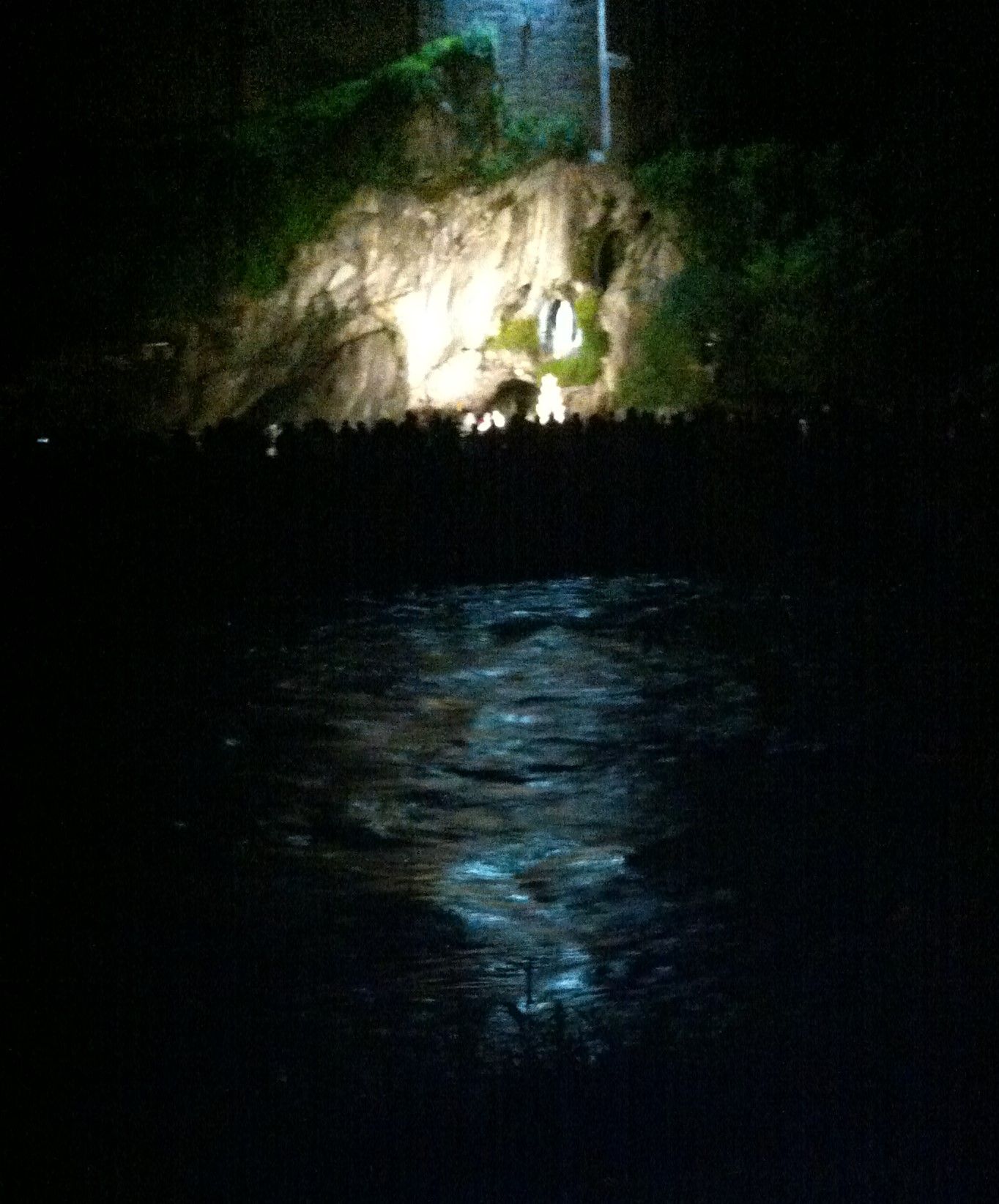 In part this is illusion – most of us can muster a week of reasonable behaviour where our worse characteristics are not shown too prominently, especially if we are surrounded by a lot of other people also trying their best to be their best.  But there is a deeper reality.  Mary the mother of Our Lord, and Our mother, exercises her motherhood here in a particularly special way.  Her idea of a summer holiday is that we should work hard and pray hard and not drink too hard in a beautiful space and so learn where we really are in our lives.

What we learn in Lourdes is how deep is our need to grow, and we should not be too discouraged if we seem to be at a very low level, for such growth comes through grace, the personal Gift of God Who wants to dwell in our hearts.  By working in Lourdes, you have been placed in the path of grace, developing for a time the habits of love, of self-sacrifice, of service that are the conduit through which God is changing your heart.  The superficial values that are thrust upon us in the secular world are brought into question by this love and service, and the extraordinary reality of a place like Lourdes, where for a week or a fortnight so many thousands of people devote themselves for a time to love of God through acts of worship and to the reality of what love of neighbour might mean if one took it seriously. The question is, how can we carry this through into our ‘normal’ lives?

St Thomas Aquinas, a Dominican saint saw the answer as being contained in the Beatitudes.  Seeking for happiness – Beatitude - is an inevitable human trait, though the direction of that search may lead us to different conclusions – we may seek it in material or physical pleasures, in active charity, or in the contemplation of God.  The real happiness for which we are made is the sight of God, and each of these other modes of happiness bear some relation to it.

Seeking happiness simply in physical or emotional pleasure as an end in itself is ultimately an obstacle to this type of happiness, and so Our Lord gave us the first three beatitudes to purify our desires and turn us away from the things that get in the way and prevent us from reaching Him.  Being ‘poor in spirit’ relates to humility and stops us focussing on honour or possessions as the means to happiness.  Meekness – a virtue wholly despised in most cultures – in St Thomas’ schema relates to the virtue of fortitude or courage, and to the gift of patience.  This draws us away from the twin forces of fear and anger, so that we can govern our thoughts and action by reason.  This is because meekness implies a readiness to endure whatever gets thrown at us without being disturbed. St Thomas relates the beatitude ‘Blessed are they that mourn’ to the virtue of prudence and the gift of counsel. We are expected as Christians to make right use of the good things of earth, which is prudence, and to be ready, if need be, to cast them aside deliberately for the sake of the kingdom.  In the book of the film ‘the sound of music’ the family Von Trapp are suddenly impoverished, and this rocks them so little that one of the children remarks ‘we were not rich – we just had a lot of money.’  We live in such times that it may be that we have to suffer more than financial loss, and weshould be ready in this sense to ‘mourn’  even when it costs us friends and lovers, position and the esteem of our society.

The virtues and gifts which are instantiated in the first three beatitudes thus bring us through what is called in other places the purgative state of prayer.  Next comes action.  The beatitude ‘Blessed are they that hunger and thirst after justice’ relates to the virtue of justice and the gifts of piety, reverence and generosity.  So we move beyond just fulfilling the claims of justice through to a point where we thirst to do so.  A man I much admired in my youth, though I think he made some mistakes, was Bob Geldof who lost his temper to such splendid effect over the Famine in Ethiopia, and set up Band Aid to feed the hungry.  He was ‘hungering and thirsting!

Justice in St Thomas’ schema leads to mercy –we go beyond the claims of justice to spontaneous favours.  These first belong in the natural realm of generosity towards those who belong to us, but by a supernatural gift of reverence towards God we are empowered to reach out in mercy even to those who do not belong to us.  So we go on pilgrimage to Lourdes and serve sick people who are not related to us and have no claim on us – but mercy stretches across all borders and boundaries: There have in the midst of all the horrors of ISIS been stories of Muslim men and women who act beyond familial justice and plead for the lives of their Christian neighbours.  They tend not to live very long, and their last acts of mercy should place them, at least in our minds if not in the canons of the Church, as among our most glorious martyrs.  God’s grace is not limited to His sacraments.

These active virtues turn us into ‘the clean in heart’.  You will have noticed that Lourdes is a place for – literally - muscular Christianity.  But it is as much a place of penance and of prayer, and the two lead into one another, a seamless garment.  So our hearts are cleansed, which brings us through the virtue of knowledge to the gift of faith.  Mother Teresa of Calcutta preached the Gospel of salvation to millions by the action of mercy.  In our own smaller way – by taking what we have learned in the foothills of the mountains here into the fabric of our lives we can grow in faith and transmit faith to others.   So through the supernatural virtue of charity and the gift of wisdom we can be the ministers of peace in our broken and endarkened world.

As young or not so young Catholics we have the duty and privilege of being invited to this life of the Beatitudes – we come from the Baptismal era of belief, through the living out of our Confirmation as soldiers and witnesses for Christ.  Through this – the work of a week in Lourdes, the witness of our lives when we go home, we are led into the life of contemplation, the friendship of God.

However because we are not simple or reasonable, there is a tendency for this to be cyclical – conversion and belief followed by action, followed finally by mystical contemplation may be the ‘proper’ order, but the reality of a life lived towards God is that there are many new beginnings of belief or conversion, many re-commitments to active charity, and (to help us on our way, bending to our weakness) God does not leave it to the end of a life lived perfectly to begin to reveal Himself, but is Himself the beginning middle and end of the ‘Why?’ underlying all our belief, conversion, and lived experience.

In a word, we can hope despite sin because we are not Pelagians, and so we believe that the whole process is underpinned with the love of God which holds us not like a slippery rope in a stormy sea, but with the firm grasp of our Father’s hands