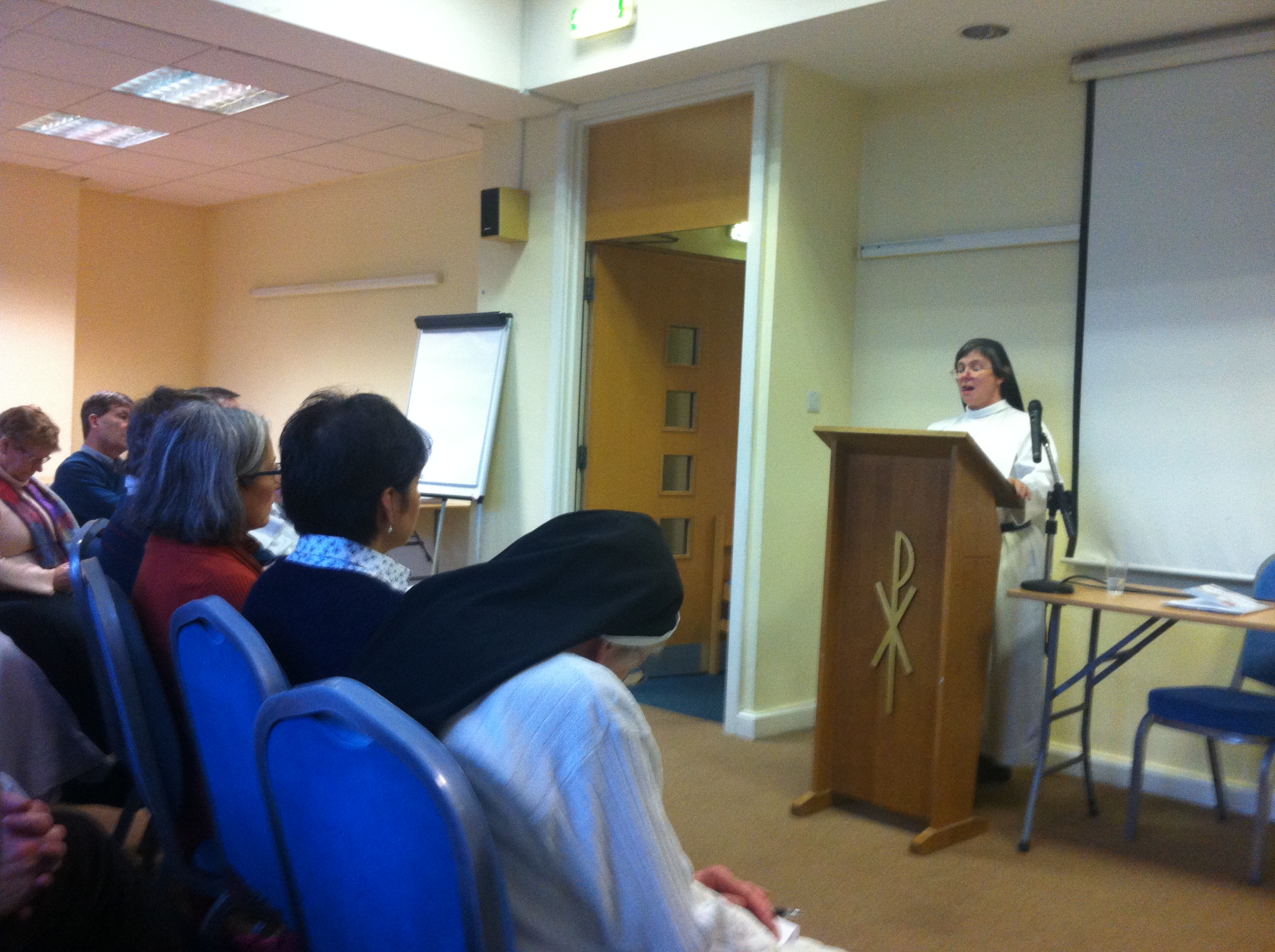 The idea that mercy might come to an end is indeed a disturbing one.  But, of course, although the Jubilee of the Universal Church is over, and the doors of mercy closed on the Solemnity of Christ the King, the Jubilee of the Order is still going strong, for another couple of weeks at least. And the overlapping of the two jubilee years seems an appropriate occasion to ask: is there a particular Dominican understanding of mercy? How, to put the same question another way, are mercy and preaching to be connected?

As so often, of course, there are probably as many answers to those questions as there are Dominicans, but, for what it’s worth, here's mine.

I’d like to structure this brief presentation around the so-called four pillars of Dominican life. I have a sense, from talking to some of the friars of the English province in particular, that the concept of the four pillars is emphasised more in some branches of the OP family than in others, so, in case it’s not familiar to everyone: the four pillars of Dominican life are said to be prayer, study, community life and apostolate, or mission. I am not sure – and would be fascinated to know if anyone else has this information – who first enumerated them in this way. As we’ll see a little later, slightly different lists have been devised at certain points in our history, and indeed the notion of the four pillars is not exclusively Dominican property: shortly after the beginning of his pontificate, Pope Francis gave a talk to religious in initial formation in Rome in which he proposed just these four components for consecrated life in general: so, there you are, they have not only papal, but, more impressively Jesuit approval.

But how do  the four pillars shed light on the theme of mercy? What   is it to be merciful not only in our community life and our mission, but also in our prayer and our study? And how might all of this somehow be regarded as connected with preaching, specifically?  We need, before we begin to explore this question, at least something of a working definition of mercy. And one possible place to look for a characteristically Dominican one would be in the writings of St Thomas Aquinas.

St Thomas deals with mercy in several places in the Summa Theologiae, but most generally, and most helpfully for our purposes, I think, he defines it thus:

Mercy is heartfelt sympathy for another's distress, impelling us to succour him if we can.     For mercy takes its name "misericordia" from denoting a man's compassionate heart [miserum cor] for another's unhappiness. (ST II iiae 30)

What I'd like to do now is to invite you all to join with me in reflecting a little on how, in the very foundations of our tradition, mercy is reflected in the community life, prayer, mission and study of Dominicans.

When we are clothed in the Dominican habit, and again when we make profession, we are asked by our superior what we are seeking in taking this step, and the answer that the liturgy puts on our lips is "God's mercy and yours". I think we perhaps sometimes assume that what this means is simply that the community we are about to enter, or to commit ourselves to afresh,  is a place where we may expect to be forgiven our sins against fraternal charity and be expected to forgive in return.  That's in itself an immense thing to ask for and to receive. But we so often think, I suspect, of mercy in relation to justice, and thus to forgiveness, that we miss the even bigger picture.   If we take St Thomas's words seriously, the plea for mercy means something still more challenging, because more all-encompassing.

I mentioned earlier that there have been other attempts to enumerate aspects of Dominican life which look a little like our four pillars; one that inevitably brings a wry smile to the faces of Dominicans who live in community is that of Blessed Humbert of Romans who, in the late 13th century averred that Dominican life consisted of prayer, study, preaching…and penance. So, the joke goes, we have replaced penance with community life. And, of course, there is a proper sense in which, for all the joy and celebration that is rightly a part of our life in common,  if we give ourselves wholeheartedly to building community, it will entail a certain degree of suffering: as in marriage, family or professinal life, there will be times when we tread on each other’s toes, metaphorically at least, times when we are (or feel that we are) misunderstood, taken for granted, or whatever. But there is also a kind of suffering that is a consequence not of our more or less minor failures in charity, but part and parcel of charity itself: times when we suffer not because of, but  with our brothers and sisters who are going through a tough time, when we experience the suffering which is compassion, in other words, the suffering with the other in his or her need, the heartfelt sympathy, misericordia, of which St Thomas speaks.  [historical example?]

This brings us, perhaps most naturally, to thinking of mercy as an integral part of the preacher's life of prayer, since, however powerless we may feel when confronted with the sufferings of our brothers and sisters, the one merciful thing we can always do in our heartfelt identification with their sorrow,  is beg mercy from God for them. Perhaps the single most insistent note that is struck in the accounts we have of St Dominic's personal prayer is just this: this is the prayer, above all, of costly, compassionate, merciful intercession. The Nine Ways of Prayer, for instance, in speaking of St Dominic's habit of praying in a cruciform position notes his motivation in doing so: it's not for Dominic, as it is, for instance, in the Franciscan tradition, fundamentally a penitential gesture, but a petitionary one:  adopting the posture of Christ crucified as a means to identification with the supreme act of intercession to the Father which is the crucifixion. Thus Dominic prays to save pilgrims from death by drowning, prays to restore a dead teenager to life with arms outstretched in imitation of his Saviour.

As the author of the Nine Ways tell us, "this was how the Lord prayed when he hung on the cross, his hands and arms stretched out, when, with great cries and weeping, his prayer was heard because of his reverence."

Other witnesses speak of Dominic's passionate prayer, in particular, his weeping and roaring in his anguish for those who he feared were perishing . This was so marked a characteristic of his nocturnal prayer life that, in the early days of the Order, the novices, keen to emulate the founder's zeal, had to be asked to keep things down a bit, so as not to disturb other brothers who might wish to study or sleep. Jordan of Saxony expresses it with unforgettable beauty:

God had given him a special grace to weep for sinners and the afflicted and oppressed; he bore their distress in the inmost shrine of his compassion, and the warm sympathy he felt for them in his heart spilled over in the tears which flowed from his eyes.

Dominic's intensely emotional intercessory concern for whose salvation he fears is, of course, of a piece with his active ministry, with his preaching. Dominic did not preach to the Cathars out of some tidy-minded bureacratic desire that everyone should think as he did. Still less for Dominic, surely, was preaching a matter of pride, of getting one over on the opposition, but of  humble service of the truth. I was once startled to hear the suggestion, from an eminent Dominican historian, that when our holy Father debated with the Cathars, he didn't want to win. But, of course, that's absolutely right:  he cared not that he should win, but that the truth should win, and this partly because the God of truth is thus honoured, but also partly because of his love for his Cathar opponent, his heartfelt concern for their misery: we cannot bear to see those we love enslaved and we know, on impeccable authority, that the truth will set them free. As a more recent great Dominican preacher, Vincent McNabb puts it, if you don't love your fellow men, don't preach to them; preach to yourself, instead. Preach to yourself, that is, until you do love them

And that brings me finally to study. Some forms of study are obviously direct means to the end of showing mercy; if as a Dominican the primary focus of your preaching the goodness of God's human creation is through involvement in healthcare or education, for instance, you will need to undergo appropriate professional training. It's also clearly the case, as our tradition suggests, and as anyone who has ever taught knows, that the context of education provides abundant opportunities to show mercy. St Thomas Aquinas, it is said, only once in his life betrayed the slightest irritation when asked for advice on the basis of his reputation for learning: that solitary occasion was when he received a letter in the middle of Holy Week, asking for the elucidation of 36 minute rubrical points. Significantly, the author was the Master of the Order. Thomas's more typical response, when approached, not by the great and the good, but by the beginner, the little ones, was a generous giving of time and attention to the question asked, as, for instance, in his Letter to John, in which he issued the student brother looking for help with study methods with firm but compassionate advice of abiding significance. It’s also noteworthy that all four of our pillars seem to be present, explicitly or implicitly in Thomas’s mind as he writes.  But there is something else, too. For Dominicans, study is not simply ordered to preaching in a utilitarian way, though it is of course true that we can only preach if we have first learned what to say and how to say it; . For Dominicans, as St Thomas also tells us, our preaching is to be above all, a passing on of the fruits of our contemplation, and study and contemplation are intimately connected. Whatever we study, at whatever level, and with whatever degree of formality, it should lead precisely to a wondering contemplation of the beauty of God and his human creatures, and a heartfelt desire to give glory to him by sharing with them his mercy.

So, for Dominicans, preaching isn't just one thing we do when we happen not to be praying, studying or building community. Rather, our prayer, our study and our community lives are themselves forms of preaching, forms of making known and manifest the compassion of God. All these four inter-linked aspects of our life, the four pillars, if you will, have one end. And it is the end of mercy.