'A liturgical pilgrimage' Reception of the Habit 27th September 2018

by Sr M. Pauline Burling (Prioress General of our Congregation)

PART I:Address to the novices to be at the beginning of the Clothing Ceremony.

“If anyone wants to be a follower of mine let him renounce himself (herself) and take up his cross and follow me.  For anyone who wants to save his life will lose it; but anyone who loses his life for my sake, will save it.” (Mark 8:34/5)

Postulants kneel 'What do you seek?' 'Gods mercy and yours.'

On 12 September you entered our Novitiate House formally prior to receiving the Dominican habit.  In bygone decades you would have been called postulants because during these 15 days of preparation - much shortened, of course, when compared to 6 (9) months some of us present had.  Hopefully with the graces received, and possibly increased during your retreat, you may be even more resolved to ask (postulate) for the Dominican habit and thereby start the Novitiate proper.

During this period I have accompanied you from afar making a kind of liturgical pilgrimage with you, Anna, Chiara and Melissa, by following our Dominican ORDO and recommending you to the saints as they appeared, or simply by reflecting on the Gospel of the day and thinking of you.  [Don’t worry; I will not give you every one of my daily reflections of this past fortnight…but just a few “peaks”.]

You entered on the day the Church commemorated the Most Holy Name of Mary in many parts of the world and so I commended you to Our Lady and asked her to be at your side when stepping into St Catherine’s, 155 Huntingdon Rd., Cambridge.  Then we met Our Lady again as Mater Dolorosa on 15 September standing at the foot of the cross, after having celebrated the ancient feast of the Exaltation of the Holy Cross the day before.  With the Church we participated in the triumph of the Cross singing the Introit: “We should glory in the cross of our Lord Jesus Christ for he is our salvation, our life and our resurrection; through him we are saved and made free.” [However, the latter clause in Gal 6:14 reads in the literal translation: … “by which the world has been crucified to me and I to the world.”  I prayed that you will learn to do so, i.e. to be always united with Christ, especially when you will feel the weight of the (his) cross intensely.  That is what St Chrysostom (feast day 13 September) did who died when walking into his exile on 14 September 406, crushed by vile opposition and sheer physical exhaustion.

In 1937 anticipating more oppression from the Nazis Dietrich Bonhoeffer would put the same reality very tersely saying: “When Christ calls a man he bids him come and die.” [1]  And the gospel of the 24th Sunday of the Year (16 September) of which I read the excerpt at the beginning of my talk re-iterates the message of the Cross for his disciples:

“If anyone wants to be a follower of mine let him (her) renounce himself (herself) and take up his (her) cross and follow me.  For anyone who wants to save his (her) life will lose it; but     anyone who loses his (her) life for my sake, will save it.” (Mark 8:34/5)

And that is what St Matthew did when he responded after hearing Jesus’ invitation “Follow me “at the tax office and without any questions or further explanation “he rose and followed him”.  (Mk 2:14).  Once again I like to quote Bonhoeffer here focusing on Matthew’s call:

“We are not expected to contemplate the disciple, but only him who calls, and his absolute             authority. …. And what does the text say about the content of discipleship? Follow me, run    along behind me!  That is all.”[2]

Last Sunday, the 25th Sunday of the Year, (23 September) Jesus after repeating the prophecy about his suffering, death and resurrection, also points to another vital if not fundamental element of discipleship:

It would seem that the disciples while arguing about precedence among themselves had not yet grasped this basic truth of Jesus’ mission, namely that their master “had not come to be served but to serve and give his life as a ransom for many” (Mt 20:28)

Now it would seem that there is one perfect disciple who had already learned the lesson of true service through her total dedication, and that is Our Lady, of course.  You will recall that here in England we keep the memorial of Our Lady of Walsingham which in your diocese of East Anglia is kept as a feast.  You may have visited the shrine already but if not you are most likely to do so within the coming months as the shrine is only about 70 miles from Cambridge.  There is no time to give the whole story of its rich history now, but it suffices to say that the ancient shrine of Walsingham was called England’s Nazareth because it was dedicated to the Mystery of the Annunciation.  According to visionary Richeldis de de Faverches a replica of the Holy House of Nazareth was built in 1061 and for 477 years this shrine was a focus for medieval pilgrims from England and all parts of Europe.  As you will know, the reformation put an end to all pilgrimages and other devotions to Our Lady and the saints here in England, but in the late 19th century Catholics began with a small but at the same time strong revival of what is an essential component of Catholic life and devotion.  It has grown powerfully thanks also to thousands of migrant Catholics from Africa and India and plans for a larger basilica are being developed at present.

Let us come back to the mystery celebrated in Walsingham on 24 September [a kind of mini celebration of the Annunciation of the Lord, if you like].  Our Lady’s response to the Angel sums up discipleship almost better than any other definition:  “Behold, I am the handmaid of the Lord; let it be to me according to you word.” (Luke 1:38)

And yet, after her unreserved consent, Our Lady as Mother of the Messiah still had a lesson to learn because she had to become disciple and partner in the mission of her Son Jesus Christ.  Hans Urs von Balthasar[3] maintains that the relationship of Jesus and Mary thus changed or rather, that a reversal of rổles took place: Mary had initiated her Son Jesus into the traditions of the Old Covenant, [although we must keep in mind that it was not from Our Lady but from his own knowledge in the Holy Spirit that Jesus was aware of his identity and the mission of his Father, cf. “Did you not know that I must be in my Father’s house? (Luke 2:49)].  Von Balthasar suggests that after Jesus began his public ministry, having “increased in wisdom and stature”(Luke 2:52), he took on the formation of his mother for his mission so that she would be ready to stand underneath the cross and finally become Mother of the Church, wonderfully confirmed when she prayed with the nascent Church.  [Erziehung Marias zur kirchlichen Mutterschaft = education to ecclesial motherhood]  This painful formation was prophesied by Simeon predicting that a sword would pierce Our Lady’s soul, that is, rip her open and away from OT traditions to faith in the Word-made-flesh of God’s incarnate Son.

Examples of episodes of “formation”:

Also the other two scenes recorded in the gospels as apparent rebuffs should be seen as education in discipleship: that is, moving/breaking away from mere family ties (physical descent) to all embracing communities regardless of flesh and blood,

The truly blessed: (Luke 11:28) …when Jesus says in response to a woman praising his mother’s breasts: “Blessed rather are those who hear the word of God and keep it!”

I would like to suggest that our and your further education in discipleship began/begins by entering religion formally, publicly proclaiming through our habit that we are Christ’s.  Through the trials that will inevitably come you will proceed to a fuller participation in the mission of Christ and the Church.  As our sister, Mary is our fellow disciple but reassuringly also our Mother.   Our Cistercian Brothers proclaim this every day in their Marian Antiphon sung after Vespers:

“We are your children,

Born of the anguish and death of your Son.

We are his Body, fed at his table,

Sharers with you in the same faith and love.

Pray for us always, dear Mother and Sister,

Bring us to knowledge of Jesus our God.”

I intended my address to be a reflection on what I considered liturgical peaks during these last 15 days and I think it was most appropriate to have begun with Our Lady but also asking her now to join us as we implore the Holy Spirit to make us worthy dwelling places:

The habits lie ready to be presented. 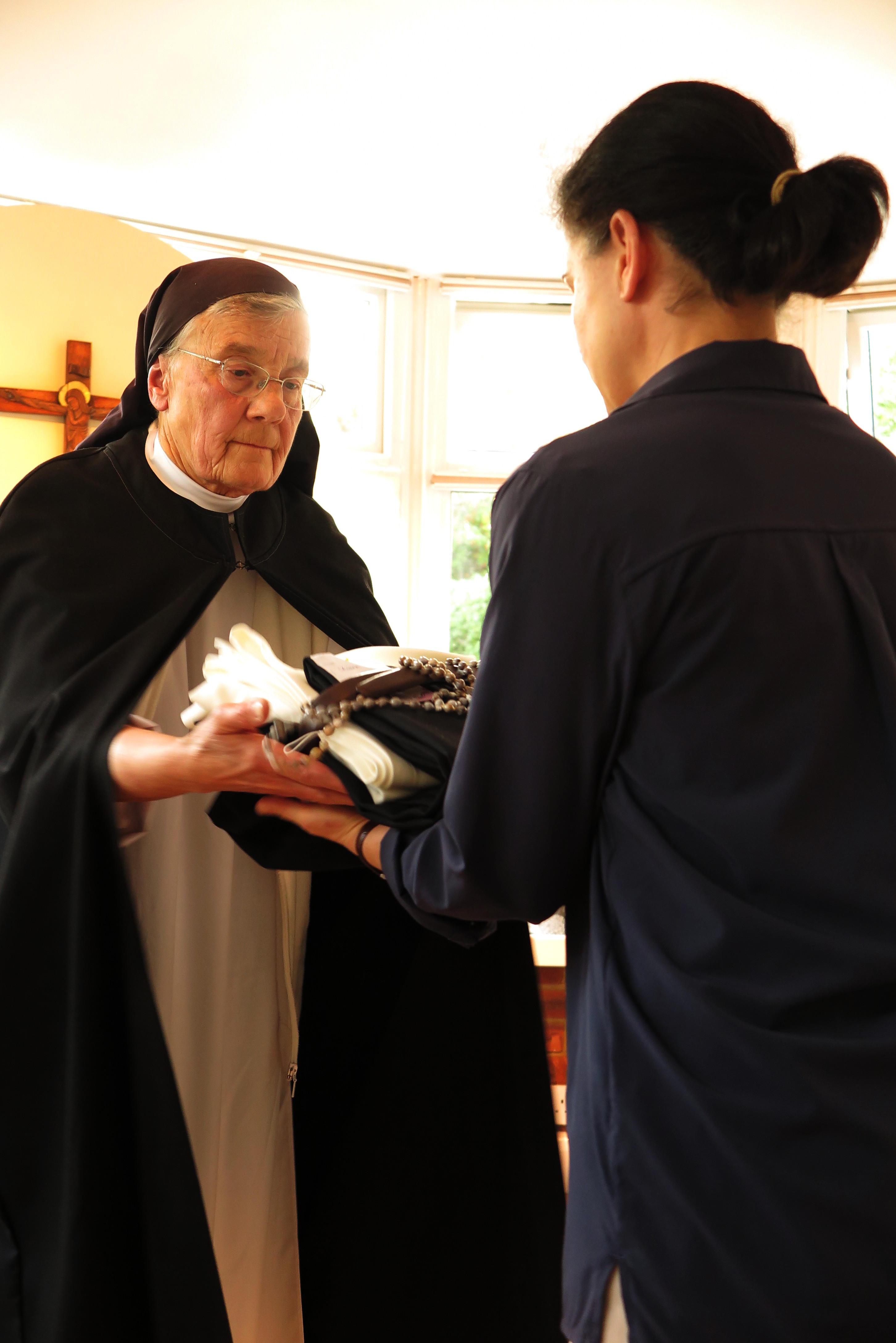 Each novice to be receives the habit.